Posted by Kathleen Blanchard on August 30, 2008 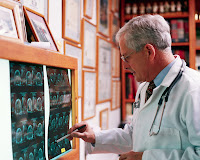 According to research from Johns Hopkins, the brains of stroke victims can be re-wired by walking on a treadmill, years after stroke has occurred. According to Daniel Hanley, M.D., professor of neurology at the Johns Hopkins University School of Medicine, "This is great news for stroke survivors because results clearly demonstrate that long-term stroke damage is not immutable and that with exercise it's never too late for the brain and body to recover."

The study, published in Stroke: Journal of the American Heart Association, shows that it’s not necessary for stroke patients to give up the fight against disability, negating the theory patients must just learn to adapt to short-term improvements in functional ability.

The study, conducted by scientists at Johns Hopkins, the University of Maryland, and the Department of Veterans Affairs Maryland VA Medical Center at their Geriatric Research, Education, and Clinical Center (GRECC), have been developing a treadmill protocol for stroke victims over the last decade. Patients recruited for the program had strokes an average of four years earlier, and some six months prior.

Seventy one subjects enrolled were tested for brain activity by way of MRI, as well as receiving an assessment of mobility and V02 capacity, a measure of cardiac fitness. The patients were then split randomly into two groups. At the start of the study, half could walk without help, and the rest used a walker, cane or wheelchair.

One group walked on a treadmill three days a week up to forty minutes, using a sling and tether if necessary. Intensity was increased as tolerated, never severely taxing the group beyond moderate exercise. The second group received stretching exercises from therapists for the same period.

Andreas Luft, M.D., a visiting researcher who worked with all three institutions who conducted this study says, "This suggests that the brain is responsible for the improvement we saw in patients' walking ability. It seems to be recruiting other regions to take on the job of areas damaged by stroke."

Dr. Hanley says, most patients are told to “learn to live” with their disabilities, and that perhaps programs for rehabilitation should not be focused on the short-term. The researchers believe their findings can give patients a way to fight back even decades after a stroke had occurred, and likely reducing the risk of a second stroke by increasing fitness levels.

We can hope the study will provide impetus for the development of specialized training for therapists as well as the development of ongoing rehabilitation programs for stroke survivors. Visit the National Stroke Association website for information on prevention, patient advocacy, stroke information and seminars.