Posted by Kathleen Blanchard on August 22, 2008 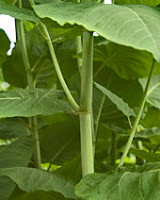 Public demand for natural insecticides has lead researchers to develop a new organic pesticide, obtained from the giant knotweed plant. Pam G. Marrone, Ph.D., presents her report at the 236th national meeting of the American Chemical Society, highlighting the development of the biopesticide that is safe to humans, animals and the environment. The product is expected to be available in October for conventional growing purposes, and in 2009, a new formulation will be available to organic farmers.

The giant knotweed grows along the East Coast and other areas, and is indigenous to Japan. The plant bloom from July to October, and can grow to over twelve feet tall. The scientists say the plant has the ability to innately fight diseases such as powdery mildew, and bacteria that invade fruits, vegetables and even garden ornamentals, as well as mold. The active compounds indigenous to the plant act as an alarm system, alerting plants to use their natural defenses.

Marja Koivunen, Ph.D., director of research and development for Marrone Organic Innovations says the sale of synthetic pesticides is expected to diminish, and that biopesticide could account for 4.25% of sales, globally, by 2010. "I think it's a combination of the movement of green chemistry, trying to protect the environment and people's thoughts about their own health — maybe not even their health but their kids; and grandkids' health." "I think the time is right, there's more demand. People are becoming more aware of the negative effects of conventional pesticides. At the same time, growers are more willing to switch. They have more choices and incentive compared to 10 years ago, “says Koivunen.

The cost of buying organic is the subject of much discussion, and public concern about the health impact of synthetic pesticides has increased in recent years. Diseases related to organic pesticides include cancer and neurologic diseases, such as Parkinson’s disease, and infertility and birth defects. Organic produce without pesticide residues are shown to be higher in anti-oxidants, and simply taste better. The news is good.

Source:
A new biopesticide for the organic food boom