Posted by Kathleen Blanchard on August 19, 2008 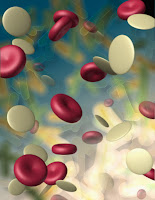 Most people are aware that drug resistance has been an ongoing problem for treating disease. Antibiotics and chemotherapy drugs have become less effective, as multi-drug resistance develops in humans. The challenge to researchers has been to find new ways to manage infection and other diseases. According to a new study, Stanford researchers have harnessed nature to find a way to get inside body cells by using arginine, an amino acid manufactured in the human body.

The scientists figured out how to accomplish their goal by honing in on guanidinium compounds, which are subunits of arginine, used naturally by cells to introduce foreign substances. The results breathe new life into existing drugs that are surrounded with arginine, thus “tricking” cell membranes into allowing medications to enter.

According to Paul Wender, the Bergstrom Professor of Chemistry at Stanford University, "Arginine-rich sequences appear to figure in the mechanisms by which many pathogens invade cells. In essence, it (arginine) changes its physical properties by shaking hands with all these cell membrane components." Once the bond is made, cell membranes break, allowing medications freedom to move about inside the cell and do their job. The basic theory is that pumps enclose cell membranes when they become sensitized to medications, acting as guards. According to Dr. Wender, "If you're not recognized as being part of the club, then you're kicked out. If we think of the pump as being a bouncer for the cellular club, then effectively, what we're doing is disguising one of these therapeutic agents to get it in through the back door or the side door."

The benefits are far-reaching. The scientists are especially interested in the fact that their methods can be applied to various types of medication, the most exciting of which is Taxol, used to treat ovarian cancer, and targeted especially for this study. Taxol is effective only to a point, and then cancer cells resist it. Dr. Wender says, "It's an exciting result to be able to take a drug known to work against cancer, but stymied by resistant cells, and restore it to effectiveness using an arginine transporter."

Further benefits may apply to drug-resistant tuberculosis, an emerging issue, malaria, and other types of cancer. We can look for further studies, but so far, the researchers have seen positive results in mice. Included, is the possibility that drug delivery may be better controlled, a key element in providing patients with consistently therapeutic blood levels of chemotherapy agents and anti-microbials.