Posted by Kathleen Blanchard on August 09, 2008 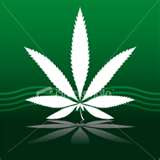 Another small study shows that marijuana relieves pain. HIV infected individuals who smoked cannabis were found to experience relief of neuropathic pain, as well as improvement in mood and daily functioning in a Phase 2 trial, led by Ron Ellis, MD, from the University of California, San Diego.

The study, published August 6 in Neuropsychopharmacology, included 34 eligible participants, 28 of whom completed both cannabis and placebo treatments. The subjects were monitored in a hospital setting, while they received treatments with both placebo and active cannabis. Potency ranged between 1 and 8%, 9-tetrahydrocannabinol, smoked four times daily for five consecutive days during two weeks of treatment. Each treatment phase was separated by a two-week washout period. The Descriptor Differential Scale (DDS) was used to measure changes in pain intensity as a primary outcome. Mood and daily functioning were used as secondary outcomes, each evaluated at the end of the treatment week.

The results included a 30% relief in pain, mood and daily functioning with cannabis treatment versus placebo in 0.46 and 0.18 of the study group respectively. The group continued with their normal routine of analgesics throughout the trial. The researchers report that cannabis was well tolerated and effective for pain relief when used in conjunction with analgesics. Two patients experienced “treatment-limiting toxicities”.

Dr. Ellis, in a published statement to Medscape Neurology & Neurosurgery says, "Our study shows that for patients who are unable to achieve adequate pain relief with other medications, cannabis may be useful”. The researchers also caution that smoking cannabis is less that optimal due to adverse effect on the lungs. They caution, "The delicate immune systems of seriously ill patients may become compromised by the smoking of marijuana." Studies are under evaluation for the use of vaporization and mucosal cannabis sprays in the United States, both of which are already approved in Canada and the United Kingdom.