Posted by Kathleen Blanchard on January 17, 2009 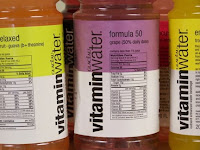 Coca-cola faces a lawsuit over allegations that their vitamin enhanced drink, "Glaceau Vitaminwater" dupes consumers. However, Diana Garza Ciarlante, a Coca-Cola spokeswoman, calls the allegations "ludicrous", saying that today's consumers are savvy enough to read labels and sort out the nutritive value of what they consume. Rather than protecting consumers, Garza claims the suit is "about increasing the readership of CSPI's increasingly irrelevant newsletter."...Read "Coca Cola Spokeswoman: Vitaminwater Allegations Are Ludicrous" at emaxhealth.com
coca cola vitaminwater lawsuit Glaceau Vitaminwater vitaminwater nutrition