Posted by Kathleen Blanchard on October 11, 2009 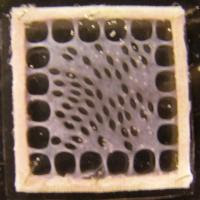 Researchers at Duke University have used embryonic stem cells from mice to develop a patch that could be used in humans to repair diseased hearts. Though the living cell patch is not ready for humans, the discovery is a first step toward finding a way to mend hearts that are damaged.

The scientists grew heart cells in the lab using cardiac cells known as cardiomyocytes. A gel was used to encase the heart patch and hold it together, made from fibrin, a protein involved in blood clotting. They found that with helper cells called cardiac fibroblasts, the heart patch grows the same as in a developing heart.
Read entire article
heart patch heart patch developed heart patch to mend diseased heart