Exercise for fibromyalgia: Does it help or harm? 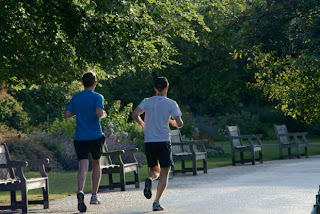 Exercising when you have fibromyalgia is extremely difficult. But new research shows genuine benefits for treating the condition. The finding also shows exercise will not worsen pain from fibromyalgia, which hopefully will ease patient fears.

The research comes from a Wake Forest Baptist investigation and is published in the journal Arthritis Care & Research.

Dennis Ang, MD who authored the study said light to moderate exercise can improve pain, fatigue and difficulty sleeping that is associated with fibromyalgia.

He explains people with the condition start to exercise for a week or two. When they start hurting they blame it on exercise, so they stop.

The hope is that the study will allay fears about exercising for patients with the disease.

Ang enrolled 170 volunteers for the 36-week study to investigate the effect of light jogging or brisk walking on fibromyalgia. Participants' walked or jogged 20-minutes a day.

Physical activity assessments were completed at weeks 12, 24 and 36.

The result showed regular moderate physical activity for a least 12 weeks improved fibromyalgia symptoms, compared to people in the study who could not perform the the activities.

Ten percent of the U.S. population suffers from fibromyalgia, making the finding important. The condition is thought to be the result of abnormal pain processing.

The new study supports the benefits of exercise for fibromyalgia. Ang says the most important finding from the investigation is that exercise does not make fibromyalgia worse.